John Stringer explains what schools have been doing to predict the path of evolution...

A Warwickshire village school is filled with pictures, models and books about the future. Not tomorrow, or next week, but the Earth as it will certainly look, and the plants and animals that might inhabit it, two hundred million years from now. These are not fantasy creations; they are based on scientific knowledge, and the children have devised their animals’ adaptations to the environment, life cycles and place in the food chain. They were all inspired by a multi-media project called The Future is Wild, and the birds in this article are some examples. 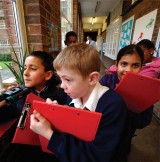 The carakiller is a flightless bird, hunting in packs on the plains of the Amazon Grasslands five million years from now. When the scientists devised this ‘ostrich with attitude’, they imagined that it might evolve from a present-day bird of prey; and it needed a place in the food chain. As a top predator, it might feed on the baboon-like babookari; they in turn could weave fish traps, and the fish would eat algae and pondweed. The green plants, the producers, first captured the Sun’s energy that supported the whole chain.

Creatures of the future

Ask children to devise a creature of the future, evolved from a present-day animal. It can be prey or predator; but it will need a food chain to support t. Food chains are inefficient at transferring energy, so they are no more than four or five links long. Children can fit their animal into a chain: Sun > green plant producer > herbivorous consumer > carnivorous predator (and maybe another, top predator).

The spink has taken the place of the present-day mole, burrowing underground. Its wings have become shovels, it communicates with squeaks and whistles, and only the queen lays eggs. Animals living in caves and tunnels are prisoners of the dark. They may be colourless and eyeless, finding their way by touch. Total darkness is a unique habitat, but some spiders, crickets. centipedes and fish – and bats, of course – have adapted to it successfully.

Living in the dark

Ask children to think about total darkness – not the ‘darkness’ of a dim bedroom, but the pitch black of a cave or tunnel. How can an animal move around, find food, find others of its kind and survive? What would be its life cycle? No Sun means no green plants, so what would the creature eat? Could it make its own light? Drawn creatures, with written explanations, can be mounted on a black background. Make a dark cave with blankets over a table; act out living without sight; make devices in DT that help you get around in darkness. 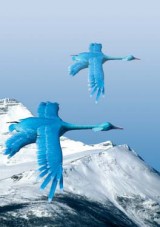 (Science: Forces And Movement; Moving And Growing; Interdependence And Adaptation)

‘Two wings good; four wings better’ – especially if you are flying in the thin air 10,000 metres above the Great Plateau formed when Australia drifts north and fuses with the coast of Asia, as it will a hundred million years from now. The Great Blue Windrunner has feathered legs and its unique colour shields it from ultraviolet light. Only after scientists devised the windrunner was the fossilised skeleton of Microraptor gui found – a dinosaur from a hundred and twentyfive million years in the past; a dinosaur with four wings…

Ask children what difference large wings can make. Gliding birds – sea birds like the albatross – have large wings. More manoeuvrable, flapping, darting birds have small, fast-beating wings. Model this with paper spinners. Take a narrow rectangle of paper and cut halfway down its centre from the top to form two flaps or wings. At the stem, cut two small horizontal slots below the wings and fold the two resulting tabs into the middle. Gently bend down the wings to form a ‘Y’ shape. (Not a ‘T’ shape, which is unstable). Now ask the children to record what difference small and large wings make when the spinner is dropped from a safe height. Does it spin differently? Drop faster? Drop more accurately? Load the spinner differently, using paper clips pushed on the stem. What difference do they make?

The great blue windrunner can soar at high altitudes on its long narrow wings. At low speeds, the extra wings increase surfaces area and uplift. The tiny ‘canards’ on its neck help with stability.

Activity four: When seals are extinct 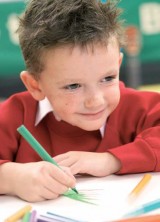 Most of the species known to have become extinct over the past hundred years were eradicated, directly or indirectly, by mankind. Sea mammals are endangered too; and the Future is Wild imagined what would happen if the seals and sea lions died out. What would fill the environmental niche? The gannetwhale is the size and shape of a walrus, but has evolved from the present day gannet. The mother gannetwhale lays one egg at a time, coming ashore to incubate it while the male fishes to feed the whole family.

Children will learn a great deal about our impact on the environment by researching endangered species. The websites of environmental organisations like the WWF – the Worldwide Fund for Nature – are a good starting point. They can ‘adopt’, research and present on recently extinct birds and mammals, including the Barbary lion, Passenger pigeon, Japanese wolf, Caribbean monk seal, Burchell’s zebra, Thylacine or Tasmanian Wolf, Pink-headed duck, Hawaiian O-o and Bali tiger. Remind children that these are the big and spectacular losses. There are small irreplaceable losses of animals and plants, every day.

The Future is Wild is a 13 part CGI television series, a DVD, books and even a theme park ride. You and your children can learn more at its website: http://www.thefutureiswild.com

Here you will find a wealth of free education resources, and in ‘Your Pages’, examples of children’s work from across the country.

Currently, the project is offering its education pack – worth over £40 – for £20 to UK schools, including post and packing. This pack includes a wipe-clean full colour timeline for the last – and the next – two hundred million years; a glossy picture pack of its future plants and animals; a book of photocopiable activity sheets and a full colour wall poster. (The book is referenced to Key Stage 3, but the activities are easily adaptable to other ages). Find the order form on the website.