Discover the early life of Siddhartha…

After the birth of the new prince, Siddhartha Gotama, many people visited the palace to honour him and bring gifts. One of the visitors was a holy man who told the king that the prince would either be a great king like his father, or a holy man who would save the world from pain and suffering. His father wanted him to be a great king, so he never let his son outside of the palace. This meant that Siddhartha lived a life of luxury and never saw anyone who was not young, fit and healthy.

At this point, let the children discuss what they would consider ‘a life of luxury’ to be. You may want to show photos of sports cars, huge mansions, latest gadgets, tropical islands etc. to whet their appetites. Ask the class to divide a piece of paper in half and cover one side of it with all their ‘luxuries’. When they’ve finished, tell the next part of the story:

Eventually, Siddhartha made some journeys outside the palace. Each time he went out, he saw someone who was poor or suffering or mourning and it disturbed him greatly. The real world was nothing like life in the palace! On his fourth visit outside, he saw a wandering holy man who had left his home and possessions, and was walking around searching for the true meaning of life and the importance of peace and freedom. The holy man seemed to have a sense of peace around him. When he returned to the palace, Siddhartha was dissatisfied with the riches and luxurious palace living. Everything about life in the palace had lost its meaning.

Talk about the objects the children have placed on the ‘luxuries’ side. These are mostly things that there’s no chance of getting, at least any time soon! Explain that Buddhists believe the way to be happy is not to have everything you want, but rather to learn to want everything that you have.

In response, ask the class to draw, on the other half of their paper, all the things that they’re glad they have got. Older children will be able to express gratitude for more abstract ideas such as health, friendship, love etc.

Activity 2: In the middle

Siddhartha spent six years listening to wise teachers, talking with five friends who were thinking about the same big questions as he was, and meditating (thinking deeply in silence). He had been eating barely enough to survive and had hardly slept. Eventually he realised he was no closer to finding the answer to his questions, so he decided to get fit and well, and then meditate to find the answers. He knew it wasn’t right to live a life full of only pleasure, but he also felt it wasn’t right to completely deny himself everything, so he decided to try to find a middle way.

Once he was well again he sat down under a tree, now known as the Bodhi tree, and meditated until he reached enlightenment. This means he understood the cause of unhappiness and how he could help people overcome it, and also that he was free from the circle of death and rebirth known as reincarnation.

After reaching enlightenment he was known as the Buddha, which means enlightened or awakened one.

Talk with the class about this ‘middle way’. Give them some scenarios on pieces of card with some extreme reactions on them. For example:

• Owen is having trouble with Louis in the playground. His friend Luke says he should fight him. His other friend, Savan, says he should just keep quiet.
• Charlie would like pizza and chips every day. His Nana says he should never eat pizza and chips because it’s unhealthy.
• Emma doesn’t want her friend Tanisha to play with anyone else or she says she won’t be her friend any more.
• A teacher is getting cross with her class. She says either they work in silence or the whole class will stay in at playtime.

Through drama, role-play or discussion, ask the pupils to think about a ‘middle way’ in each of these situations. This can be extended to pupils thinking of their own issues and why a ‘middle way’ solution can help.

How do the ‘five precepts’ encourage a better life? 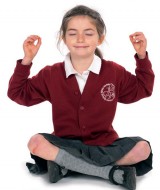 Put up a picture of the Earth from space and discuss the problems that are facing life on the planet. What part can each person play? Put the pupils in pairs or small groups and ask them to come up with some promises that someone who was worried about the Earth could keep, that would make a difference.

Explain to the class that Buddhists have five promises they try to keep. These promises are like guidelines to help them live their lives well and are known as the Five Precepts. Each of these precepts has two parts: something to try to avoid and something to aim for. Talk them through the Five Precepts, where believers promise:

• Not to harm any living beings – try to show more loving kindness and concern for all life.
• Not to steal – try to be more generous in your thoughts, words and deeds.
• Not to misuse the senses – practise stillness, simplicity and contentment. (Nb. This is a children’s version; the believers’ precept addresses sexual behaviour.)
• Not to speak cruelly or tell lies – try to speak the truth and say kind and helpful things.
• Not to take drinks or drugs that stop you thinking clearly – try to be aware of all your thoughts, words and deeds.

Explain that these are things that Buddhists promise to try to do, rather than rules. What do pupils think the difference is between a rule and a promise? Which do they think is more successful as a way of encouraging people to live better lives? Why? Finish by making some class promises that would make school a better place.

Find out more about the Buddhist tradition…

There are many online resources that give a wealth of stories from the Buddhist tradition. You could choose one to share with the pupils, or ask them to read some for themselves and identify what advice these stories might give a Buddhist believer about how they should live their lives. Here are some good links to start with:

Alternatively, virtual tours of a temple and monastery are available by searching the RE gateway website, http://www.reonline.org.uk