Children will have much to discuss as they dig deeper into Anthony Browne’s multi-layered narrative, says Pie Corbett...

Anthony Browne is the new Children’s Laureate and one of the foremost makers of picture books. He has spent many hours watching gorillas in a wildlife park and if you’re familiar with his stories you’ll know they often feature apes playing the role of humans. He is also famous for his surreal and playful illustrations. The books are part of a game he plays with the readers. In his illustrations he draws on famous works of art but he also hides surprising images so that a tree takes on the shape of a hat or footprints become leaves. However, Voices in the Park is more than surreal entertainment. It is rich in many layers of meaning, and I have known children avidly discuss the story for over an hour.

Activity one: In the beginning

The children’s first meeting with the book…

Begin by showing the cover and reading the title. What do the children think the book is going to be about? Many children suggest that it is to do with friendship because the dogs and the two children are together in pairs. Draw their attention to the title. What does it suggest to them? Make a list of ideas. These can be revisited after reading the book.

Activity two: What do they think?

Gather the children close on the carpet so that they can see the illustrations, or use multiple copies. Show each page and read the book straight through without stopping. I would then take children’s first reactions. In his wonderful book Tell Me (Thimble Press), Aidan Chambers suggests that a useful starting point for ‘Book Talk’ is to ask the children to list and discuss what they have liked, did not like as well as sharing any particular puzzles or patterns. These starting points will lead into fruitful observations. Allow the children time to listen and think. Mirror back comments that might lead to further thought.

The devil’s in the detail…

Take each double spread in turn and spend time looking carefully. This could be done in groups that report back, pointing out to the class what they have noticed. It is worth drawing their attention to:

• how the characters are shown – what do the colours and images suggest to you about the characters – what do they make you feel?;
• the use of colour in different sections;
• the use of shadow;
• look at the use of space on the pages, especially where a strong vertical line is used to split up characters (such as a lamppost or slide) or bring characters together;
• the typefaces (and don’t forget to look at the title on the cover);
• notice ‘playful’ ideas – references to famous paintings, tricks, ideas from stories (Narnia) or films (Mary Poppins, King Kong), surreal images;
• which pictorial ideas are playful and which suggest something meaningful that adds to your understanding;
• select the most important image and say why you have chosen it.

Activity four: One voice at a time

Allocate an individual ‘voice’ to groups within the class and ask them to make a list of ideas about the different characters. After a while, come back together to share each group’s thoughts and make a class list. Further possibilities include:

• discuss what each character thinks about the other three;
• draw the links between characters; hot seat each character in turn;
• write a diary entry or letter from each character;
• in role as a character, make a mobile phone call to a friend;
• select the key image from each section and explain why it is important;
• having selected a key image, the children can then draw a ‘thought bubble’ to show what the character is thinking
• discuss why the characters might behave as they do;
• write a note from Charles to Smudge or the other way round;
• write letters to an agony aunt or hold an ‘advice surgery’ for each character to discuss their problems;
• freeze frame an image and then interview the characters about what they are thinking and feeling;
• and don’t forget the dogs…

It would be worth finding the original paintings that are referenced in the text – such as ‘The Scream’ by Edvard Munch. Try creating surreal poems in which everyday objects become something unusual. Imitate the following writing pattern and model a class version

Walking in the park I saw – an autumn tree burst into flames, a cloud become a swan; a bench grow crocodile’s feet; the children’s slide stretch into a rainbow; grass grow tongues and whisper secrets, a statue wave its stony hands, the boating pond turn into glass and shatter into a thousand slices of ice….

Activity six: Making it your own 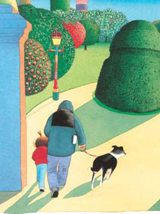 Creative responses to the story…

Some of the illustrations might lend themselves to straightforward copying – illustrations of carefully drawn skeletal trees in the shape of hats, or two dogs chasing each other through trees. You might also:

• create a one minute TV advert for the book;
• design a cup for each character like the one at the end but with a different image;
• make close observation drawings of flowers or trees;
• paint pictures of an everyday scene in the local park or playground but change a few objects into something else (a tree might become a face);
• rewrite the text;
• present the text orally in a groups of four, each taking the different voices;
• dramatise the text and present the story as a mini play in four parts – present this to other classes;
• use a digital camera and video a dramatised version.

Activity seven: What is it all about?

Discover multiple meanings in the text…

Of course, books mean different things to different people. However, it is interesting to list the varying ideas the children have. One Y6 class I worked with recently listed the following ideas: happiness; relationships; money doesn’t make you happy; making friends; the dogs are the happiest; posh people and snobs; things are not what they seem.

Ask the children to find a line in the text that captures a key idea. Children often choose a line such as ‘you’ve got to have a bit of hope’. Summarise what the children think by asking them to write a recommendation about the book – I like this book because…it made me think about…when I read the book, I felt…

How To Use Books To Help Children Cope With Life