The Anglo Saxon period is one that is pivotal to the history of Britain and yet until the implementation of the present curriculum it was consigned to the bit in between the Romans and Tudors, sometimes known as ‘the Dark Ages’. However, this was the time when the identity of England was forged. When investigating this period during KS2, we tend to focus on key events or individuals and of necessity, in a time of war and change, most of these are men. Women played a key role in society however, particularly in royal households, and there are some notable ladies to discover.

Wynflaed was a widow living in the south of England in the late Anglo Saxon period. The years around 910 had seen big freezes and bad harvests as well as increasing Viking raids. During the 920s the kingdom of England was created, but many of the men had perished in the Viking wars. We do not know about Wynflaed’s husband, but we do know that she had two grown children and two grandchildren. She was a lady of some considerable wealth and her will is the first known woman’s will in British history. We can use this document to get some idea of what life would have been like for a wealthy Anglo Saxon woman.

Begin by printing off a copy of Wynflaed’s will (with both original Anglo Saxon and modern translations) from tinyurl.com/TPwynflaed. How can we use the information it contains?

Wynflaed had a number of land holdings that she bequeathed to her family and the church. In the chart (right) is a list of her main holdings:

On a map, plot where the different holdings are. What do you notice about the distance and spread? How do you think Wynflaed would have managed these different farmsteads? Encourage children to think about difficulties and solutions to these problems. How would Wynflaed have travelled between them? The gift to Alfwolde may give us a clue here (horse). What do the names of the places tell us about them? If we look at the map could we find any evidence to support this?

Wynflaed specifically mentions a number of animals. What are they? Are there any animals that the pupils think she might have but that are not mentioned? Why do you think this is (consider the value)?

Wynflaed seems to have had quite an extensive wardrobe. Make a list of all the clothes she has. Why do you think she is giving away her old clothes? How would people feel about getting someone’s clothes? What were they made of? Wool and linen (flax) would have been the only real options here. While no sheep are specifically mentioned in the will, every homestead would have had sheep to provide wool.

Spinning and weaving were important roles for all women and girls. Wynflaed gives her granddaughter two slaves with important skills – a weaver named Edgyfu and a seamstress called Athelyfu. Wynflaed had a large number of slaves as well as freed men and women on her properties. She grants freedom to quite a number of them. You may or may not decide to consider this aspect of Anglo Saxon life.

Textiles belonged to the woman who made them (provided she was free born) and she could use them as she wished. The words ‘spinster’ and ‘webster’ have feminine suffixes, showing that they are women’s roles. You can buy drop spindles and wool for spinning quite cheaply online. Get the children to try to spin some thread then use it to make a tiny weaving. Think about how long it would take to spin enough for piece of cloth for a tunic. Get the children to look for some of the words for clothing in the original will: 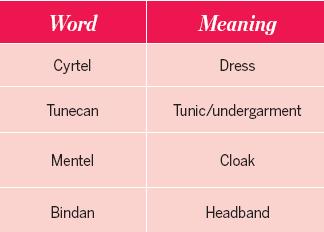 Print off images of Anglo Saxon dress from tinyurl.com/asclothing1 and tinyurl. com/asclothing2 and ask the children to draw one of the characters from Wynflaed’s will with her new clothes on, in the style of the illustrations.

What other sort of textiles did Anglo Saxons have in their houses? Look at the bequests to Athelflade (daughter), Eadwold (grandson) and Eadgyfe (granddaughter). Can the children identify other pieces of furniture or belongings that would have been in an Anglo Saxon home?

Wynflaed gives away a number of pieces of jewellery. Look at some examples of brooches and cloak pins. You can find good images on the British Museum’s online catalogue (search for ‘filigree brooch or ‘disc/garnet brooch’). Ask the children to identify characteristic features in terms of artistic style and materials used. You can also reinforce understanding of symmetry. Children could design and decorate their own out of clay.

How much money does Wynflaed give away? How much of it was gold (mancus)? Why does she give so much to the church?

It was the role of the women of the house to receive guests with a cup of welcome. Count up the number of cups and chalices that Wynflaed mentions. Research what these may have looked like. Use a description of one of Wynflaed’s to design your own.

Finally, you could get children to research aspects of Anglo Saxon farming to find out what life would have been like on one of these many farmstead holdings.

Karin Doull is a principal lecturer in primary history at the University of Roehampton. She taught in a number of London primaries and is a member of the Primary Committee and a trustee of the Historical Association.