Computer games like Guitar Hero can be the driving force for some incredible learning experiences, as we found out speaking to Ollie Bray... 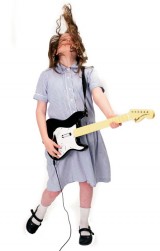 The educational value of playing Iron Maiden’s greatest hits on a small, plastic guitar may not be immediately obvious. But it’s actually the basis for a highly successful transition programme in Scotland. If you’re wondering what on Earth we’re talking about, we’re referring to the Musselburgh Cluster Guitar Hero Project, one of a number of games based learning experiments taking place north of the border.

For the uninitiated, Guitar Hero is a popular game for consoles such as the Play Station 2 and Xbox 360. It puts players in the role of an aspiring musician, thrusts an undersized toy guitar into their sweaty palms and challenges them to tap along to the beat of classic rock tracks using five brightly coloured buttons. Sounds ridiculous? Just wait until you try it – you’ll be hooked.

From this description, it still might not be apparent exactly how Guitar Hero fits into the curriculum. However, while the game may not have much intrinsic educational value, it is a powerful motivator; as Ollie Bray, deputy head at Musselburgh Grammar School and currently on secondment to Learning and Teaching Scotland, discovered…

Teach Primary: How did the MGS Guitar Hero Project get started?

Ollie Bray: I think transition is a real problem and I’ve yet to come across anyone who’s come up with a decent solution. The Guitar Hero Project was our attempt to address some of the difficulties pupils experience when moving up to secondary education.

Musselburgh Grammar has a number of feeder schools and we’re all members of the same cluster group. We decided to see if we could persuade all the primary head teachers to agree to run the same project, based on Guitar Hero, with their P7 classes. This way, when they started at their new school, every child would have at least one thing in common. 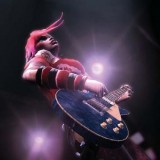 TP: What was the head teachers’ response like? Did they question the value of playing a computer game in school?

OB: We did meet some resistance to start with. But we talked people round by highlighting two points. Firstly, play has always been an important tool in any good teacher’s toolbox. Games based learning is just an evolution of play – from being out in the playground to board games to computer games. Secondly, the Guitar Hero Project isn’t really about the computer game. It’s about rock music. The game is a hook to enthuse the children.

TP: How does the Guitar Hero Project work. What are the children actually learning?

OB: We split the project into three stages. To being with, the P7 teachers were asked to use the game as a context for learning between Easter and June. They had total ownership of how they wanted to tackle the project. Some teachers completely cancelled the curriculum, with the exception of maths. Everything was based around the game: dance lessons performed to rock music, creative writing activities inspired by Guitar Hero characters, planning a world tour in geography, creating band logos and merchandising in art and design; financial education on marketing, profit and loss and more besides.

The next stage involved bringing all the P7 children to a transition morning at the secondary school for a ‘battle of the bands’. We set up the games consoles in the assembly hall and asked the pupils to play against a member of their new class – as long as it wasn’t someone from their own primary. We intended this to be a bit of fun, but we were flabbergasted by the level of interaction – the coaching, the collaboration and the encouragement. It didn’t matter so much that they hadn’t met before because they all had a common interest in the game.

TP: Was the entire transition morning spent playing the game?

OB: No. As well as playing Guitar Hero, children met with their new guidance teacher and engaged in conversations about what their primary school had been doing in connection with the game. They also took part in workshops ran by older pupils, such as ‘Guitar Hero orienteering’. This was really about going out and exploring the school, but all the clues were based on songs or characters from the bands.

The final stage of the project took place in August once the children had moved up to the secondary school. We’re becoming increasingly aware that children don’t always like to talk about themselves with people they don’t know. Instead, since we knew that everyone had an interest in – or at least some exposure to – Guitar Hero, teachers were asked to use the game as one of the main contexts for discussion.

TP: Did you run any more classroom activities, beyond using the game as an ice-breaker?

OB: We worked with the whole of the first year to design Guitar Hero postcards. Children then used these to write messages back to their old primary teachers, telling them what they missed about their old school. This helped to give pupils some closure. We were surprised by the quality of writing. I think it came as a bit of a shock to some of our English department. Because the children knew they were writing back to their old teachers, they wanted to please them. This high standard of work then acted as bench mark for our staff. 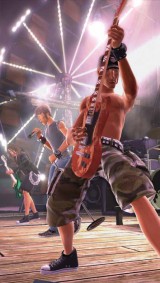 TP: Would you recommend that teachers look into using other computer games as a context for learning?

OB: Definitely. I think off the shelf games are becoming increasingly more appropriate for education. Endless Ocean for the Nintendo Wii is a great example. Players have to swim around an ocean taking photos of wildlife and this can be linked to investigating sea pollution, or studies on marine animals.

Ollie Bray is currently seconded to Learning and Teaching Scotland http://www.ltscotland.org.uk, investigating how the social web can be used to enhance learning and teaching. You can find out more about his ideas for using ICT in the classroom on his blog, http://www.olliebray.com

“We were surprised by the quality of writing. I think it came as a bit of a shock to some of our English department”

I want to play!

Try the guitar hero transition project for yourself…

Many of the lesson plans produced by the primary schools involved in this games based learning experiment are available online, along with support and further information. Visit http://edubuzz.org/guitarhero for more information.