The science of superheroes

Life isn’t easy for superheroes these days. Their evil opponents, after years of humiliating failure, have finally got their acts together and developed all kinds of ways to thwart their do-gooding counterparts. The safety of the world is in doubt and the superheroes, shadows of their former selves, are turning to your pupils, the brains of the future, to help them. 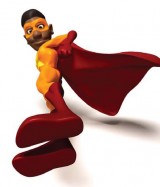 Dr D has blocked all the roads into and out of New York City with huge bricks too heavy for even a superhero to lift. Strongman has tried to push the blocks but with no success. Finally, in a last act of desperation, he asks Ice-man to help. How do you think he could help move the blocks and save the city?

Set up a brick on a surface representing a road and give children a force meter to help them find out how much force would be needed to move it. (A string, tied around the brick, will help them to attach the force meter.) Ask them to record their results in a table.

Repeat the same task with different surfaces – plastic, sandpaper, paper – and finally a shallow tray which has been filled with water and frozen. Enter these results in the table and, as a conclusion, ask the children to write a passage from the story detailing what Ice-man might have done to help! 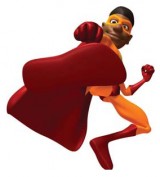 After being exposed to high levels of radiation, Metal-man has found that his protective layer has decayed and he has lost all of his protection from the death darts of Colonel Drak. Not only are Drak’s new weapons extremely sharp, they are also magnetic, so Metalman cannot return to his previous metal skin for protection. Can you find a material that will save him from certain doom?

To protect Metal-man, we are looking for a non-magnetic material that is hard but not fragile. (It may even involve a change of name!)

Make a Metal-man body out of plasticine and lay him on the test bed. Choose a range of materials that could be used to protect him. To test each material’s suitability, use a small piece to cover Metal-man’s plasticine body. Now blu-tack drawing pins to a kilogram weight and lay it, points down, on the ‘protective layer’. (Health and Safety Alert! – be careful that the weight, plus pins, can’t fall off and injure someone. An idea may be to place Metalman inside a large plastic container first.)

After 30 seconds, remove the weight and note any damage to his body. Record this in a table and try another material. As part of the experiment, check that none of the materials used were magnetic as this will attract the death darts!

Stretch-woman wants a new supertool for her birthday that will help her trap and retrieve objects from otherwise unreachable places. But to fit in with her superpowers it will have to be incredibly stretchy.

Set up a challenge. Stick a line of tape on the floor of the hall or playground. Now place a piece of paper labelled ‘top secret’ about three metres away. For extra fun, lay out sheets of blue paper on the floor and add shark fins and sea monsters. Tell the children they have to retrieve the top secret document without getting eaten by the sharks and monsters.

Give them a selection of materials to use: fishing line, string, elastic, rubber bands etc - all just too short to reach. Ask them what they would need to help each material reach further. (Encourage them to think of a force that would act on the other end of the string/elastic/rubber band to stretch it.)

Once they have got the idea of attaching a ball or something similar, ask them to decide how it would retrieve the document. Ideas may include blu-tack, double sided tape, glue stick or chewing gum! Then let the challenge begin. Make sure that children use underarm throw and only one person tries at a time. The winner will be the one who retrieves the document, which will contain instructions or perhaps a voucher for a small prize.

Magnetic-man fears attacks from Professor Q who has developed magnetic mines that will attach to his body and destroy him. He needs a defensive shield and he needs it soon!

Remind children that with magnets, opposite poles attract and like poles repel. Give pupils a selection of different size and shape magnets and ask them to arrange them on a sheet of card in a way they think will provide the best defense against Professor Q’s mines (you may need blu-tack to hold them in place). Test the different arrangements to see if they repel incoming magnetic mines and make a record of how close each force field allowed the mines to get before neutralising them.

As an extension you could demonstrate an electro magnet that could be switched on and off as necessary and test its strength dependent on the current used in the coil.

After years of climbing walls, Arachnogirl is nearing retirement and her superpowers are starting to wear out! She first discovered the problem when she slipped from the wall of the school while rescuing a cat. Now she needs a new way to help her stick to sheer surfaces. Can you help?

Begin by looking at close up pictures of creatures that can cling to walls, such as lizards, spiders, some birds etc. Identify what helps them to stick and discuss how this could be replicated. Ideas could include tiny hooks made from paper clips, suckers made from silly putty, suction pads, or perhaps some more outlandish ideas!

The children could be given blocks of plasticine (of equal mass) to make an Arachnogirl and test her out on a brick or roughcast wall with their devices. They will find that Arachnogirl’s shape and centre of balance will influence their chances of success.

Children’s achievements can be recorded by taking a photograph of Arachnogirl from a low position to give an exaggerated sense of the height she’s reached.