The Iron Man is one of the best loved of all children’s stories. In this topic, it’s developed into an exciting way of beginning the school year with a new class of expectant children. It provides plenty of opportunities to assess how the children engage in a range of activities and allows children to develop ownership of their classroom through the creation of a display (if you’d prefer to start your year in a different way, this unit of work would sit happily at any point during the first term).

The focus of this topic is the creation of a literacy working wall. Most classrooms have a space dedicated to English; the best examples I’ve seen involve a theme, in many cases a favourite character or book. The Iron Man is a goldmine when it comes to developing English skills: story structure, drama, use of adjectives or simile, this book has it all. And, of course, it also features one of the greatest modern fairytale characters ever created. 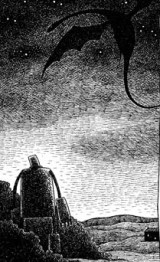 This activity uses the self-destruction of the Iron Man in chapter one to inspire some eye-catching mobiles. Read the chapter with the children; then recap the sequence in which the Iron Man puts himself back together again having stepped off the cliff. Ask them to recreate the sequence in pairs – either orally, or with actions matched to the description from the text:

‘The hand stood up on three fingers and its thumb, and craned its forefinger like a long nose.’

The different orientations of body parts also work well as shadow puppets – how would the children create a silhouette of the hand and eye attached to the top of a leg? Give the children the opportunity to perform their sequence to others in their group – get them to refer to the part of the text they have used.

Now that they’ve tried out this bizarre collection of body parts for themselves, they are ready to start work on their mobiles. They need to decide which parts they’re going to include – anything up to six seems to work well. It’s best if they choose an arm or a leg for the top of the mobile – once hung horizontally, each limb will be long enough to allow several other body parts to be hung from it.

Once drawn onto card, the parts need to be cut out and painted on both sides. When dry, extra detail can be added with marker pens; then they can be threaded together, ready for hanging.

One of the staples of a literacy working wall in KS2 is a list of conjunctions that enable children to join clauses in compound and complex sentences. In keeping with the Iron Man theme, this activity encourages children to identify conjunctions used in the text, collect and then classify them before finally making paper chains (of the rusted iron variety!) to display on the working wall.

In pairs, the children can search the opening chapters for conjunctions, recording them as they go (provide them with examples if they’re unfamiliar with the term).

The children will find that Ted Hughes does not use a huge range in his writing, instead preferring to use combinations of short simple sentences for effect. Where used, they are more often coordinating conjunctions (and, but, so etc.). After finding examples of these, the children can start to use them for themselves. On the board, show an example of two simple sentences that could be changed by adding a conjunction – give them other examples from the text to work on in pairs, adding a range of subordinating conjunctions (because, since, although etc.) for more able children.

When they’ve shown that they can use conjunctions to link clauses in sentences, they can record the words they have used on strips of grey or silver paper to make into chains. These can then be added to the display like strings of spaghetti for the ravenous Iron Man! 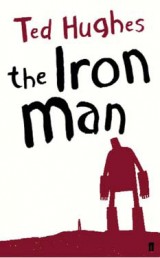 With mobiles and conjunction chains at the ready, it’s time to get started with the working wall. The display is based on the third chapter, part of which is set in a scrapyard that becomes the home of the Iron Man. Ideally, a fairly large display board will be used, the intention being to create the scrapyard scene as a border that will remain in place throughout the year whist still leaving lots of room in the middle. It’s in this space that immediate displays will be created, key learning points displayed and collections of prompts added that will grow with the children’s literacy skills.

In preparation for the display, ask the children to collect clean foil packaging or other bits of shiny scrap materials and bring them into school. The ideas I’ve used come from the version of The Iron Man illustrated by Andrew Davidson. In chapter three, there is a picture of the Iron Man in a scrapyard eating a rusty chain. On the left is a tower of battered scrap cars, piled one on top of the other – perfect for forming one side of the display. I use one car template per group and draw the outline of a simple car shape. There isn’t any need for great detail or any artistic ability on the part of the teacher, as the children will add their own detail later. The children are then given a range of materials to choose from including paints, the metallic materials brought from home and any other scraps of card or paper that would enable them to turn the car shapes into smashed up wrecks!

On the opposite side is the hero of the story, the Iron Man. Again, this is created by drawing a template for the children to paint or collage. To complete the main elements of the display, position the arm of a crane complete with chain and hook above the Iron Man (this will become a handy place to ‘hang’ the class writing/reading targets, ensuring that the display continues to be referred to on a weekly basis).

Many different things can be added to a literacy working wall – conjunctions are a must, as are reminders/examples of verbs, nouns, adjectives, adverbs and punctuation. The exact nature of the prompts is dependent on year group, but above all else they must be of use and referred to frequently to support the children’s development as writers.

The Iron Man’s challenge is another opportunity – how would journalists cover the story? This could be acted out as a TV news broadcast, or the children could produce newspaper front page stories reporting on events. (The stages the children go through to produce this writing would look great added to the working wall alongside prompts for journalistic writing.)

Finally, what if the world were threatened by a different creature? How would the Iron Man respond? Story writing would allow the children to develop themes and characters from the book to create a sequel – The Iron Man II (a bit Hollywood, but the children will love it!)