Stephen Bowkett shares a storytelling activity that gives children the confidence to say what they think...

It no longer surprises me but it still disappoints me when I come across children in school who are reluctant to express their ideas. I think this happens because they have become frightened of getting the answer wrong and looking foolish or ignorant. This in turn I feel is one consequence of a system that measures success largely by how many right answers children can remember. In saying this I’m not in any way arguing for a ‘content-light’ curriculum: knowledge is often useful and interesting, and in an ideal world children would find much of it relevant too. No, what troubles me is that as teachers we sometimes hand children knowledge without showing them how to handle knowledge; in other words how to manipulate it and make something out of it, thus forging new understandings.

In the late 1960s, the educationalists Neil Postman and Charles Weingartner wrote a book called Teaching as a Subversive Activity. It is at least as relevant (and subversive) today as it was all those years ago. In the book the authors assert that a school subject is composed of its vocabulary, which is to say that when children can manipulate the vocabulary of the subject, then that counts as a specific observable behaviour of their understanding of that area of knowledge.

This is a truism of course, but how do we help children to reach that level both of competence and confidence in handling the ideas that make up a subject?

Firstly watch out for signs of ‘the fear of the wrong answer’. These include:

• A capable child who says nothing when a ‘right answer’ is called for.
• Negative self-judgement such as ‘I know this might sound stupid but…’
• An overly cautious response – ‘I could be wrong but… / I think perhaps it might be…’
• Children avoiding eye contact when you’re searching for people to give you the answer (I used to do this as a kid so I know it’s a sign!)

Secondly establish ground rules that help the children to know that you value their thinking. You can devise your own of course. Mine are:

1. What do you think?’ is always a sincere question.
2. Asking is intelligent behaviour. When you ask a question it doesn’t mean ‘I’m ignorant’, it means ‘I want to find out more’.
3. Facts are provisional until we can decide otherwise.
4. Imagination is more important than knowledge (Einstein).

As an aside, this third ground rule caused some controversy during a training session I ran. One science teacher said, ‘What, so you’re telling me it’s only provisionally true that water boils at one-hundred degrees Celsius!’ ‘Well it does at sea level,’ I answered, with no trace of triumphalism in my voice.

Ground rules such as these help to fix the ethos of the classroom, the spirit of enquiry that is the driving force behind the children’s learning. A simple and very effective activity in building towards this is to show the class an ambiguous shape such as the one below and ask, ‘What could this be, what does it remind you of?’ or ‘What do you make of it?’

This is a safe question because it has no single right answer and a child isn’t risking failure and humiliation when she says ‘octopus’s tentacles’ or ‘question marks’. Get into the habit of asking the same question in a more challenging context (that is, when ‘right answers’ are required or when more ideas need to be assimilated.) So for instance if you’re analyzing a piece of text, offer the opportunity for the children to explore possible meanings by asking ‘And what do you make of it?’

An important implicit benefit of the what-could-this-be game is that if you receive, say, twenty responses from the class, every child has experienced that image in twenty different ways. Taking a multiple perspective on ideas is one element of creative thinking.

Another is the forging of new links; making fresh connections between previously unrelated ideas.

Again, you can work up from simple beginnings. Take two ordinary images such as these and say to the children, ‘If you wanted to use these two things in a story, what could your story be about?’

• A boy found an old book in a boat.
• Two friends read about a land of treasure and decided to go there in a boat.
• A girl read a book about sailing around the world and wanted to do the same.

These too are safe replies; all of the answers are valid and can be useful. Each child who responds has linked the two images to create a more elaborate idea. Also, as in many creativethinking games, children across a wide age and / or ability range can take part. Thus activities like this one are very inclusive and allow most or all children in the class to enjoy a sense of achievement at having ‘had an idea’.

You can lift the creative challenge by combining more images. In the illustration below, for example, you might prompt the class to think further by saying, ‘If you used the book and the boat at the start of the story, what would happen next if we added the hills?’

Further images can be added, by yourself and the children, so that the whole visual comes to resemble a narrative line. This demonstrates a robust and systematic way of planning stories, but the ‘thinking agenda’ behind the activity hones mental skills and an attitude to learning that can then be transferred across the subject range.

Step up from a simple linear sequence by presenting the class with two images plus some vocabulary you want the children to use when they make a link.

The number of possible combinations now increases dramatically while the children’s minds are focused on genre-specific words. So a response like ‘The rocket was launched into orbit around the moon’ not only assimilates three ideas but also demonstrates that the child is manipulating the vocabulary of the subject (in this case a science fiction story) in a meaningful way. Obviously explain any obscure or technical terms beforehand – but that too can be an encouragement to explore differences between, for instance, an orbit and a trajectory, or a moon and a satellite. 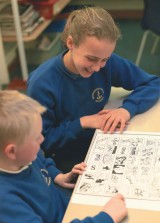 The same underpinning principles can now be used in an overtly ‘factual’ context. The grid below is based on the topic of the Anglo- Saxons. Topic-specific words and pictures are put into a 6x6 grid, so not only do the children have a huge amount of information vailable at a glance, but any idea can be accessed randomly using dice rolls – another stimulus to creative thinking. Increase the challenge of the activity by placing further items of vocabulary around the grid – so for example Book of Kells, Jutes, pagan, Christianity, Angles, Bede, Sutton Hoo and others. 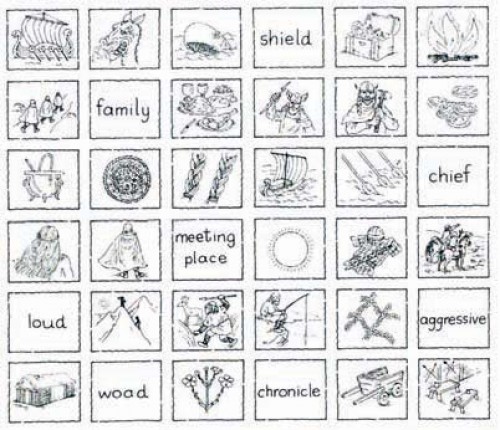 What we end up with is an activity that can include all of the children, and one that shows them how to plan stories while mastering the vocabulary of your chosen subject or topic area.

1. Pick up to six objects at random and either list them or (better still) show pictures of them. Ask the children to come up with as many links between them as possible.

2. Play the ‘If-then Game’ to explore cause, effect and consequence. Try ‘If people over 30 suddenly became one-inch tall then…?’ Brainstorm ideas and use the if-then tool as necessary.

3. Play ‘The Detective Game’. Show the children six clues and say ‘If you were a detective and knew about or noticed these things, what do you think might have happened?’ So for example:

• Mr Phillips had a plumbing business that went bankrupt.
• There is an oil stain on the drive.
• A bottle of milk on the kitchen worktop has gone sour.
• The family cat is nowhere to be found.
• A number has been scrawled on the notepad by the telephone.
• There is money in a tin on the mantel piece in the lounge.

4. Play the ‘Because Game’. Take a sentence such as ‘Steve lay slumped in the armchair’. Explain to the class that when you say it you’ll add ‘because’ and take the first response that you hear. Then repeat the response and add ‘because’, taking the first response to that you hear – and so on. It’s good fun, creates some wacky ideas, but also helps children to appreciate the logical power of the connective ‘because’.

Steve Bowkett writes children’s fiction and educational books on literacy, creativity and thinking, and emotional resourcefulness. When he visits schools to do storytelling or run workshops he is usually put in the library (where he’s surrounded by other people’s books) and introduced as a ‘real live author’, which he thinks is unnecessary because the children can probably tell the difference.

The ideas in this article are taken from Developing Literacy and Creative Writing through Storymaking: Story Strands for 7-12 year olds, to be published by Open University Press in August 2010.

How to be a singing school