Love or hate fractions, there is no escaping them. A favourite weapon of advertisers and salesmen, they crop up everywhere. The footballer seeking an ‘extra half a yard of pace’ may betray misunderstanding of the underlying ideas, but teachers know they are far from straightforward.

A group of adults was asked to write a number as the starting point for an activity. One wrote ½, leading others to claim, incorrectly, that it isn’t a number. Using fractions is one of the ways that we expand the number system to contain more than just the numbers we use for counting (the natural numbers). As children get older, extension of the number system is a powerful idea that makes many things possible. Studying fractions is also likely to incorporate some other ‘big ideas’ of mathematics, in particular equivalence. Visual representations such as fraction walls are a great way of showing that ½ = 2/4 = 4/8, but ultimately children will be helped if they can find equivalent fractions without drawing pictures, so it is important also to draw attention to the patterns and relationships in the numbers. There is also the idea of a fraction having other equivalent forms, for example decimals and percentages.

Start with a fraction written in a circle in the middle of a piece of paper. The task is to find equivalent ways of writing or representing the same fraction and to record them around the central fraction like the legs of a spider. A related activity is to make a set of cards with four equivalent ways of writing a fraction, selected from those recorded on the spider diagram. Doing the same for several fractions produces a set of cards that can be used for matching games such as pairs or snap. The set can be adapted as children become more confident and can also include decimals and percentages. Sets of fraction dominoes can also be made to further explore and consolidate the idea of equivalence.

Using images of chocolate bars, pies and pizzas for teaching fractions is well established and offers children a familiar context and visual image, but just as the idea of living on chocolate is sadly not possible, a varied diet of ideas is needed when teaching fractions.

Many children will also recognise the idea of a fraction of a set of objects which links to the idea of fraction as an operator (i.e. a third of 12 is 4). Fractions can also be found on number lines or tape measure, and other contexts include fractions as a result of division or in the context of ratio - or even intensive qualities (liquids) if you like fruit juice with your pizza.

Many teachers have favourite fraction activities, like those shown here, but it is worth reviewing the variety of models that children see and checking that it is not too narrow.

Many children’s stories can be used to introduce mathematical problems. The Doorbell Rang by Pat Hutchins tells the story of 12 cookies being baked for two children, whereupon the doorbell keeps ringing with more and more children arriving. Assuming children get equal numbers of cookies, this situation can be seen as fractions of a set, or fraction as operator; children can calculate ½ of 12, then other fractions as the story unfolds. The same situation can also be seen as division and checked by multiplication, helping children to see the connections between these things. Similar problems can be invented with favourite characters or objects and children can be encouraged to decide on sensible numbers to use for such problems.

You can go in a lot of directions starting with fractions. They can lead you to decimals, to division, to considering properties of shapes and angles and to discussions of mass and capacity. Conversely, fractions can appear when starting with these and other topics. Developing the understanding required to calculate with fractions will also help when children later carry out algebraic manipulations.

Produce a collection of objects in a shopping bag or shoe box. The task is to find half of each object or set of objects, perhaps making pairs or groups of children responsible for halving particular objects. Include things that can be halved in different ways, for example by counting, folding, or measuring and possibly some that are problematic. The activity should encourage mathematical discussion and reinforce the idea of halves being equal as well as providing links to capacity, mass, shape and money. You can use a general collection of objects, or invent a themed collection and a reason for halving it. Some examples:

Bag containing: a lump of plasticine, a pile of counters, string, an apple, a 10p coin, a piece of paper, a potato, a newspaper, a bottle of water

Keep calm and carry on 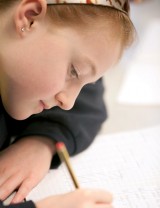 With fractions, as with other aspects of mathematics, some things can be done to reduce the chances of misconceptions and errors occurring, but it is not possible or desirable to eradicate them completely; discussions about misconceptions and incorrect answers can be valuable. Using a range of models make it less likely that children see fractions just as shapes, or think they must always be less than one. Establishing understanding of fraction equivalence and ordering should help children understand approaches to fraction calculations rather than misremembering misunderstood algorithms.

Fraction notation and terminology also present challenges, with most teachers using a combination of practice and explanation to establish the correct format and still managing a smile when children talk of “twoths” alongside thirds. Judgements must be made about when to introduce the appropriate mathematical language, perhaps gently reinforcing the technical language alongside more everyday words which children may use initially.

Everyone starts with several squares (4cm by 4cm on squared paper works quite well). The task is to colour in half of each square and to do this in different ways. As a collection is assembled, asking for different ideas only (possibly leading to discussion of what this means!) will prompt children to be more inventive. An assembled collection can lead to discussion of a range of issues like names of shapes, area, congruence, equivalence, iteration, symmetry, use of curves, even an infinity of possibilities. You may use the clip on YouTube called ‘Dance Squared’ to help children to see possibilities.

Many subject leaders identify fractions as an area for staff development. There are several resources available to help, including a ready-made staff meeting from the NCETM (see resources box). Here are outlines for two staff meetings: 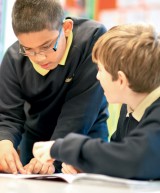 You may wish to give staff notice so they can bring favourite activities and equipment, or bring some examples yourself, or draw on ideas from the ATM (atm.org.uk) or Nrich (nrich.maths.org) websites. Alternatively you may use the meeting to generate ideas and perhaps ask staff to try out one or more of these before the next meeting, which could be a comparison of how different age groups respond to similar activities.

• Try to compose a list of contexts for or representations of fractions.
• Which are used most / least? How does this vary across age groups?
• Discuss possible reasons for using particular models or contexts.
• Discuss reasons for offering children a range of models and contexts.

A more specific discussion could be about particular activities or pieces of equipment. For each you might ask:

Before the meeting, collect examples of children’s work showing difficulties or misconceptions with fractions, or ask staff to bring their own examples, or use the preprepared set of cards available from NCETM (ncetm.org.uk). You might include some examples related to decimals. Discussion of each, perhaps in pairs or small groups can include:

• What is the underlying difficulty or misunderstanding?
• How might the misunderstanding have arisen?
• What might be done to reduce the likelihood of this arising?
• What would be the next step with this child and others in the class?

You might draw on ideas from the TLRP Research Briefing on fractions (tlrp.org), perhaps asking staff to read this before or during the meeting. Discussion of fraction misconceptions might be followed by a discussion of approaches to difficulties and misconceptions in mathematics, including how this can be built in to teaching and dealt with sensitively.

•The NCETM website (ncetm.org.uk) is a good source of support on all aspects of mathematics. It includes detailed plans for a staff meeting together with links to all the resources you will need. Typing ‘fractions’ into the search box will highlight other ideas, including many that use a range or resources you may already have - such as a counting stick, or sets of coloured rods. Staff may also wish to make use of the fractions section of the selfassessment tool concerning their own mathematical knowledge.

•The Nrich site (nrich.maths.org) is an excellent source of activities and problems and contains articles addressed to teachers. The stages given on the site correspond roughly to key stages; many activities and articles are aimed at primary level and some at older children and their teachers. As a fractions activity for older primary children or a starting point for staff discussion, try the ‘chocolate’ activity (nrich.maths.org/34). Or for an interactive on-screen version, try ‘chocolate bars’ (nrich.maths.org/1275).

•Association of Teachers of Mathematics (atm.org.uk) has a section on fractions, decimals, percentages, ratio and proportion with information about learners’ difficulties, and models and resources. (Select ‘resources’, then ‘gaps and misconceptions tool’, then ‘fractions and decimals’)

•A summary of research on children’s difficulties with fractions exists in Research Briefing 13 from the Teaching and Learning Research Programme (tlrp.org/pub).

Jenny Houssart is Reader in education at the Institute of Education, University of London (ioe.ac.uk). Her book, Supporting Mathematical Thinking, is available from David Fulton.