How to teach Chronology in KS1 & KS2

If your pupils think you grew up walking with the dinosaurs, it's time to readdress their understanding of the passage of time...

Chronology is the air history breathes. It enables pupils to place their learning within the bigger picture and better remember historical people, periods and events. Without chronology, children’s historical understanding will remain limited.

Within the current teaching and learning of history, dates have seemingly been de-emphasised and have been replaced by phrases such as ‘a long / very long time ago’. Research has demonstrated that such phrases are subjective and can represent a period of weeks to one child, whilst to others they symbolise hundreds of years. From our perspective, substituting dating conventions with ‘a long time ago’ and the like is problematic as it appears this may be cause of the temporal difficulties experienced by pupils.

Teaching chronology is statutory within the National Curriculum and KS1 pupils should be aware of terms that describe the passing of time and be able to place events and objects in chronological order. Furthermore, they should be aware of a past beyond living memory.

Early in KS2, pupils should develop an awareness of chronology, be able to employ dates and terms to describe the past, and realise that the past can be divided into periods. Later in KS2, pupils should produce work making appropriate use of dates and terms such as ancient, modern, AD, BC, century and decade. However, for chronology teaching to be effective it needs to be carefully planned and reinforced through fast-paced, engaging activities; a few suggestions for which we’ve included below.

Although many of these activities employ descriptive vocabulary (e.g. a long time ago) they can also be completed using the correct technical vocabulary (i.e. specific dates or decades can be given). 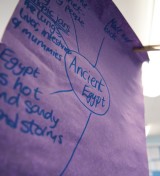 Pupils can be presented with three or four objects, such as teddy bears, toys or household objects from distinct periods that are distant from each other. Pupils can be asked to organise the objects by placing the oldest one on the left through to the newest object on the right.

Pupils are presented with a collection of four photographs of familiar objects such as toys, household objects or cars from distinct periods that are distant from each other. Pupils can be asked to organise the objects by placing the oldest one on the left through to the newest object on the right.

Pupils can be taken on a walk around a safe locality and asked to locate objects that are old and objects that are new. Street furniture provides a good opportunity to complete this activity; look out for: post boxes, telephone boxes, lampposts, houses etc. during the walk. Photographs can be taken that will be useful for further sequencing work back in the classroom.

Pupils can be asked to order the events of a story or nursery rhyme. The story or nursery rhyme can be turned into a picture story, with each specific event being denoted by an A4 picture. The children are given the pictures and have to organise these in the correct chronological sequence.

Many primary schools use time lines in an effort to promote chronology. These appear in many forms, from John West’s ‘washing line’ where time periods dangle - sometimes precariously - to more formal versions based on mathematical number lines. However, time lines do not serve any useful purpose in the promotion of time concepts if merely used for display. Outlined below are activities that ensure time lines become effective teaching tools within the primary classroom. It is important that pupils have a secure understanding of what AD means before any of the outlined activities are commenced. AD should be referred to as meaning after the birth of Christ. 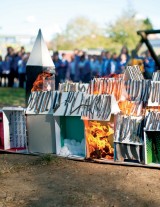 Events from your own life are a good starting point for the completion of an interesting time line. A photograph of yourself posing as a baby never ceases to capture the pupils’ imagination and can provide a stimulus for discussion. Many pupils have difficulty understanding where an adult’s life line fits into their own schema of temporal understanding. This understanding can be assisted if pupils are given the dates of their teacher’s life line so that they might compare it with their own.

When introducing the AD time line it is important that pupils are allowed to discuss what the line shows and how it is organised. The issue of placing the past on the left needs to be discussed and taught. Also, it is important for pupils to realise that the numbers become larger the closer to the present we are.

A useful follow up to the ‘teacher’s line’ is to allow pupils to construct their own personal time lines that employ dates. Your pupils can place pictures - either photographs or drawings - of events such as their birthday, first day at school etc. onto a time line. These lines can be extended to take in the lives of both parents and grand parents. This activity is useful in that it begins to develop the ideas that time existed before the pupil was born. This work slowly develops chronological understanding and allows pupils a practical reference tool for the coherent sequencing of their historical knowledge.

A class time line is a beneficial teaching tool because it enables a clear representation of the past to be seen by large groups. Although many commercial time lines are available, care should be taken in their selection. Horizontal rather than vertical time lines should be used as these appear to cause less confusion than spiral helixes or ‘zig-zag’ lines. It is important from the outset to represent centuries distinctly on the time line. This can be done effectively by colour coding these dates. Through discussion it can be explained to the pupils that the chances of a person living through more than one, hundred year period is highly unlikely. By constantly referring to these lines, pupils quickly realise how the passage of time makes it impossible for certain peoples to still be alive.

A set of cards can be made quite easily using a computer and scanner. The set of cards could include three or four people from the teacher’s own life and that of the school’s. The card should contain several AD dates; birthday, first day at school and occasions such as marriage. At the most basic level pupils can sequence the cards using each date in turn. The activities can be made more challenging by adding further people, such as those indicated in the National Curriculum, as well as people from the children’s locality and by employing BC dates. Further sets of cards can be constructed that deal with historical periods such as the Vikings, Saxons, etc. and then similar sequencing activities, as outlined previously, could be employed. When pupils are confident in these activities the next step is to look directly at specific dating conventions.

At present, many demands are being placed on curriculum time and there can be an overwhelming urge to concentrate on the content of a unit of study, often to the detriment of historical skills.

It would appear that if children do not develop a system for ordering their knowledge, it could become confused and rendered meaningless. An edit of this article was first published in Primary History magazine (history.org.uk).

Get the vocabulary right 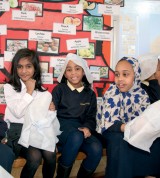 When looking to improve history at your school, it’s best to start by reviewing your current scheme of work and assessing what chronological teaching and learning is already being undertaken. This review needs to be focused upon specific questions and you will need to:

• Plan for sustained teaching and learning

Reinforce chronological knowledge and understanding through units of work that introduce and conclude each year of study and key stage.

Create opportunities to relate each new topic or enquiry to pupils’ existing mental chronological framework, thus steadily reinforcing and adding to their depth of knowledge and understanding

Place a topic or enquiry in its wider historical framework before and after it has been studied in detail.

• Use time lines consistently in teaching and learning activities

Ensure that pupils have the opportunity to record their historical learning upon individual time lines they take with them from one class to the next.

Provide each class with a large time line and ensure it is actively used within teaching and learning activities.

Dr Alan Hodkinson is an Associate Professor in the Centre for Cultural and Disability Studies at Liverpool Hope University and is also a Member of the Primary Committee of the Historical Association. Alan is a former primary school teacher and has acted as a consultant to government reviews of the primary curriculum.

Collaboration can be wonderful, but not every teacher has selfless motives