Deborah Herridge slaps on her snow shoes and wraps up warm for a chilly look at life in the freezer... 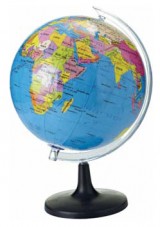 The coldest parts of our planet are the top and bottom – the Arctic in the north and the Antarctic in the south. But why, in places where for half the year the sun never sets, is it so cold?

As the Earth moves around the Sun it’s tilted on its axis: an imaginary line through the planet between the North and South poles around which it rotates. The tilt always points the same way in space. The part of Earth which runs around the middle of the planet, the equator, is consistently close to the Sun as the Earth makes its orbit and so is consistently warm; the poles are not.

During a year’s orbit, the North Pole is tilted towards the Sun in summer, keeping it in constant daylight, and away from it in winter, keeping it dark. The opposite is true at the South Pole, meaning the seasons are reversed. Imagine if the Earth wasn’t tilted – what would happen to the seasons?

We can demonstrate how there are warm and cool parts of the planet using an old football or globe to represent the Earth and a strong torch to represent the Sun. Cover the sphere with contoured strips of thermo-reactive film – the sort of film that you might find in a forehead thermometer – which changes colour depending on how hot or cold it gets.

Push a dowel through the poles of the model and make sure it’s tilted. By shining the torch directly on the equator we can see that the heat-sensitive film changes colour, showing that the land is hot. The rays of the torch concentrate the heat at the equator, but as we move north or south, the rays are more spread out and the land becomes cooler.

Assess the impact of melting ice…

Ninety percent of the Earth’s ice is in Antarctica, a continental land mass covered with ice at an average thickness of about 2,000 metres. The Arctic is a little different. Here the ice is much thinner and there is no land as the ice floats on the Arctic Ocean. Regardless of where it is, ice begins to melt and turn into a liquid at temperatures above 0°C, so as the temperature of the planet rises could the polar ice caps melt and cause a catastrophic rise in sea levels?

Fill a lidded jar with soil and gravel and place it in a glass bowl. This represents the Antarctic continent. Half fill the bowl with cold water so that the jar makes an island in the centre. Take another identical bowl and fill with the same volume of water.

Place as many ice cubes as you can on your island and mark the water level on the side of the bowl. Add the same number of ice cubes to the water in your other bowl and mark the level of water. This floating ice represents the Arctic ice cap. Place both bowls in a warm place and wait.

Once all the ice has melted, check what’s happened to the water levels.

When the ‘Arctic’ floating ice cubes melt, the water level stays about the same. This is because when water freezes to make ice, it expands and takes up more space as a solid than it does as a liquid. When the ice becomes liquid it reduces in volume and, as this Arctic ice was floating, it had already displaced a volume of water equal to the water content of the ice cube.

The Antarctic ice was resting on land, so when it melted additional water flowed into the bowl and raised the water level. Some scientists believe that if the Antarctic ice melted then sea levels would rise by about 60 metres, but since the average temperature in Antarctica is -37°C it’s unlikely to start melting any time soon!

Have you ever seen a skinny seal or waif-like whale? In Polar regions fat means fit for some animals – fit for survival that is. Walruses, seals and Beluga whales are some of the animals that live and hunt in the Arctic Ocean and they have developed a thick layer of fat called blubber just below the skin which helps insulate them against the sub-zero temperatures. 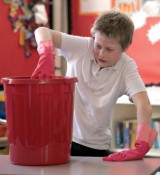 Fill a large bucket with cold water and top it up with as many ice cubes as you can make to represent the freezing polar oceans. Take two rubber washing up gloves and pack one with cooking fat – e.g. margarine – until it’s about half full. Now (if you want to avoid too much mess) have your volunteer child put on a pair of thin latex or plastic gloves to protect their hands from the fat and put the blubber glove on one hand and the control blubber-less glove on the other. Wrap some tape around the top of the gloves to secure them and prevent them falling off in the water.

Now for the fun part. Plunge both hands into the icy water. How does it feel? Time how long you can keep each hand in the water before you start to feel too cold to be comfortable. Does the blubber hand win every time? By how much? (Whenever you use ice do be careful not to let children hold it for too long or put it directly onto bare skin as it can hurt!)

Activity 4: Animals at the extremes 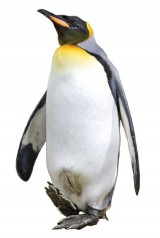 With polar winters lasting up to eight months, life for animals in these inhospitable environments is harsh. Those at both ends of the Earth have some incredible adaptations to cope with the conditions.

Creatures living in very cold climates tend to have large bodies and very small appendages (feet, wings or flippers); think of the huge bulk of a walrus compared to its small flippers. By keeping flippers small and close to the body it’s easier to keep warm.

The Antarctic’s most famous residents, penguins, have other ways of staying warm too. As well as small feet and flippers kept close to their large bodies, they have ultra dense plumage to guard against the freezing winds and water. They also maximise their body heat by huddling together and changing position regularly so that each gets a turn in the centre of the huddle and at the outside.

Create a penguin rookery using mini pop bottles filled with warm water and place them in a huddle on the ground, each bottle touching another in a large group. These are your penguins! Use your temperature probes on your data logger to measure the temperature of the water from the penguin bottle in the middle of the huddle and compare it to those on the edges. The penguins around the edges act in the same way as an insulating duvet does on your bed, for the penguins in the middle. Where would you prefer to be?

Putting pupil premium to good use