Being playful with language can help to prevent sudden bouts of narcolepsy, says Debra Myhill...

Grammar is always a hot topic, and it seems likely that a greater emphasis will be placed upon it in the forthcoming revision of the National Curriculum. It is one of those subjects that either provokes a heavy groan, or releases a flood of complaints about how young people make so many grammatical errors. There is, of course, no evidence that the latter is true! Grammar has had a place within English/literacy, both in the National Curriculum and the National Literacy Strategy, but its role has never been clear. Internationally, in English-speaking countriesthere are many similar discussions, particularly about whether teaching grammar has any impact on learners’ writing. A large review of research conducted by Richard Andrews (EPPI 2004) concluded that there was no evidence that teaching grammar had any positive influence on children’s writing. Recently, at the University of Exeter, we did a large research project in secondary schools, adopting a playful, embedded approach to grammar in the context of writing, and it had a very strong impact on writing outcomes. Over the year, the group who used the project teaching materials improved by 20%, compared with the comparison group, who improved by 11%. In this article, I’ll explain how the teaching principles we used might be equally successful in primary classrooms. 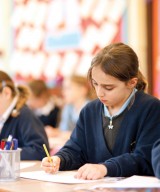 The potential benefit of using grammar when teaching writing is that it makes visible what writers do and shows them some of the possibilities that are open to them as writers. You can highlight a lot of grammar explicitly without using grammatical terminology, simply by giving patterns and structures that children can play with and appropriate for themselves. We think it is helpful to use the grammatical terminology, but we would avoid making learning the grammar terms the focus – the real purpose of this is to learn about how language works and develop a feel for the rhythms, structures and nuances of text.

You might determine what to focus on by looking at what the children in your class are doing in their writing and identifying their individual learning needs in writing. Or you might think about the kind of writing you are setting out to teach and what grammar constructions might help to develop their writing in this genre.

All of the principles discussed in this article encourage explicitness, and if you let your own creative imagination have free rein, you will think of many, many more possibilities. But here are a few to get you thinking.

• Exploring how place adverbials can establish setting e.g. A Gruffalo lived in a deep dark wood…

• Exploring how nouns in apposition can establish character e.g. Mr. Jones, the gruff farmer from Devon,...

• Exploring how over-use of ‘and’ to link ideas within sentences can cause cohesion problems within the paragraphs and experimenting with alternatives.

• Exploring how a sequence of short clauses, demarcated by commas can be used to create a sense of urgency in narrative.

When we teach reading, we quite rightly put a lot of emphasis upon developing children’s reading skills – their ability to imagine, to speculate, to infer, to predict, and so on. But we can make the most of the opportunity of reading high-quality books to help children to read like a writer, noticing and observing not just what authors are saying, but how they have said it. The possibilities are endless because we have such a richness of great books for children of all ages and interests, but here are some examples which span the primary age range.

Draw attention to the alliteration and repetition of the words that run through each encounter in the story – ‘Swishy, swashy’; ‘Squelch, squerch’ - and enjoy saying them aloud. Play with inventing some new word patterns like this. Notice the repetition of the short sentence – ‘We’re not scared!’ and play with saying it with different tones of voice and expression.

The names of the giants in The BFG are wonderful examples of kennings, an old Anglo-Saxon way of naming things. They are all compound nouns, made by putting together two nouns: e.g. Bloodbottler; Bonecruncher; Childchewer; Meatdripper. Invent some kennings for new giants, and talk about how this way of naming creates vivid character descriptions without needing any adjectives.

Ask children to look at the proper nouns in the opening of this first Harry Potter story. Discuss what kind of character a boy named Dudley Dursley might be, and what kind of people might live in Privet Drive, and whether it sounds as though working at Grunnings might be fun. Explain how choosing proper nouns to describe people and places in narrative can help you to ‘show, not tell’.

In the Exeter Project, there was a real emphasis on talking about writing, especially the language choices children were making. This helped writers to see that there were an infinite number of possibilities open to them and that different choices created different effects and emphases. With younger children, collaborative writing is a great way to stimulate talking about choices, though it is important to make sure that it is genuinely collaborative – two, or more, children writing one text. Writing on screen, or using a wiki, can also be supportive for this. Encourage the authors to discuss how they are creating their text, and why they are making the decisions they make. Sometimes the talk will be about grammar, sometimes it will be about other aspects of the writing – all writerly talk is good! 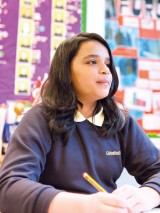 Michael Rosen once talked about language as putty,  which is a lovely image to convey just how flexible and malleable language is – we can make it do anything. An approach to the teaching of writing which encourages young writers to experiment and test things out generates an awareness of what is possible. Sometimes young writers (and indeed older writers) are so concerned to ‘get it right’ that they narrow down their options, and may play safe, writing in familiar ways.

• Creating activities that deliberately give writers options and choices, or in which they create multipleversions of a piece of writing, helps to cultivate this understanding of writerly decision-making. For example:

• Pairs of children collaboratively write the opening of a story, focusing on establishing a setting. They focus on the use of place adverbials to convey the setting, and at each point where a place adverbial is used, they generate three or four options. Then they discuss what mood they want the setting to evoke and discuss which of their options best match that mood.

• Cut up a sentence into its phrases and clauses and play with the different effects that are created when different parts of the sentence are put in different positions. Have a very prominent waste paper bin in your classroom! We need to allow writers to experiment and not be successful, what you might call constructive failure. The bin should be a place where less successful efforts can be deposited, with praise for the experimentation. Many authors have overflowing waste paper bins so why should we suggest that with young and developing writers everything should always work?

What’s in a name?

One reason many teachers are reluctant to teach grammar is because we have never really investigated what is the best way to explain grammar to learners. As a result, teachers have to create their own explanations and ways of working with grammar and sometimes these mislead children. The top three misconceptions about writing that children have link to the less than helpful ways of explaining outlined below.

1. Avoid calling a verb a ‘doing’ word as this creates confusion, because so many verbs are not obviously doing words (e.g. are; have; could) and because other words in a sentence often seem to be the ‘doing’ word e.g. I am very fond of hunting: most children will select ‘hunting’ as the verb, if you use the ‘doing word’ definition.

2. Avoid teaching children that adjectives are ‘describing’ words, as description is created through well-chosen nouns, verbs and adverbs too. Instead, perhaps explain that adjectives tell us more about nouns.

3. Avoid suggesting that children should write in complex sentences – many young writers do anyway, and a complex sentence does not mean it is a good sentence. Focus instead on something specific about sentences,  relevant to the writers’ needs, such as using ‘because’ to explain and justify an argument or using a relative clause to provide additional detail in a narrative.

Deborah Myhill is Professor of Education at Exeter University and Associate Dean for Research: SSIS. Her research projects include Grammar for Writing? - a three year study of the effectiveness of contextualised grammar teaching.

Aren’t there more important things than Pokemon Go for kids to learn about?

Teachers are our greatest asset, so why do we invest so little in CPD?