Debbie Herridge unwraps the mummy of ‘topic work’ and discovers a wealth of practical science experiments within...

I grew up teaching ‘topics’. In fact I grew up teaching the ‘integrated day’ where every subject was rammed into ‘the topic’ whether it fitted or not and ‘doing the Egyptians’ was the time to teach pyramids in shape, rivers in geography and forces in science. Why forces? Because they needed to drag the stones to make the pyramids, didn’t they! Hmm…tenuous?

I’ve come up with one or two science investigations that will enhance your Egyptians topic but still maintain the integrity of the science. Remember – we don’t have to teach something that fits into a QCA unit to be teaching science well, any investigation that develops a science skill is worthwhile, so enjoy investigating. 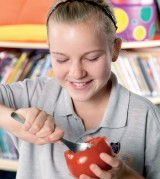 Mummies are fascinating relics of the Egyptian civilization and a great place to start investigating – not with a real body, of course, but with a tomato!

The ancient Egyptians believed that the body of a dead person needed to be preserved in order that the spirit of the deceased could live on in the afterlife. To begin with, Egyptians probably noticed that bodies buried in the dry, hot sand of the desert tended to dry out naturally and become mummified. As their civilisation became more developed, complicated rituals and processes evolved to produce more sophisticated mummies.

The first step in mummification is to get rid of the wet and gooey stuff; dry materials are less likely to rot and decay than damp ones. Unfortunately for budding embalmers, tomatoes, like us, contain a huge amount of water. The drier we can get our tomato the less likely it will rot.

Children can test this idea by sealing slices of bread in two separate Ziploc bags - or closed pop bottles. They’ll also need to place a 1cm layer of dry sand in one container and a similar layer of damp sand in the other. After a few days, observe which conditions are best for mould to grow on the bread. Imagine this on your mummy. Yuck! 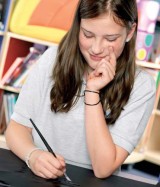 Before you start – observe your tomato really carefully. What does it feel like, smell like, what colours can you see, what about the texture of the skin? Keep an un-mummified tomato as a control to provide a comparison.

To dry out our tomato we need to make a small incision in the fruit and scoop out the seeds inside. You can throw these inside bits away. The Egyptians did the same with the internal organs. They kept the heart, which they placed inside the mummy, and the lungs, liver, stomach and guts which were kept inside canopic jars for protection.

The body cavity was then washed with wine; the alcohol was supposed to kill germs. Children can carefully rub their tomato inside and out with a dilute anti bacterial solution like ‘Milton’ then dry the excess with kitchen paper.

Now weigh your mummy. This is the premummification weight with water.

Next we need to pack the body with a type of naturally occurring salt called natron. We can’t easily get real natron, but we can make it from a mixture of table salt and bicarbonate of soda; epsom salts work well too. More able children can explore the different combinations and proportions of chemicals that work best in mummification, but equal quantities of each is a good mix to start with.

Pack your tomato cavity with your natron and then place it in a container so it is completely covered with the salt and bicarbonate of soda mix. Check its progress every few days; you may need to replenish the natron to keep it dry.

The Egyptian embalmers had to wait 70 days to complete their mummy, yours should be ready in a couple of weeks. What does it look like now? How has the colour changed, the texture? Weigh your tomato again – the difference is the weight of the water that has now been removed. If you want, now you can make and decorate a sarcophagus for your mummified fruit!

Despite this painstaking procedure, it was evaporation, caused by the hot and dry Egyptian air, that helped the mummification process the most. And we can investigate this in the classroom using salt water.

Ask the children to mix up a saturated solution of salt and water – they should reach the point where no more salt crystals will dissolve into the water. Now use the solution to paint a simple Egyptian symbol, such as an ankh, on a piece of black card; you might need to go over it once or twice to apply enough salt water. Leave it to dry – what happens?

You’ll end up with a shimmering white image on the black card where the water has evaporated leaving the salt behind. Where has the water gone? Can the children investigate ways to speed the evaporation process up?

Lesson 2:The gift of the Nile

The Greek historian, Herodotus, called Egypt ‘the gift of the Nile’, meaning simply that without the river there would be no Egypt. Rainfall in Egypt averages around 4cm a year so water is extremely valuable. Only the tiny strip of land by the river could be cultivated and the annual inundation of the Nile was hugely significant for the ancient Egyptians. We can use this information as a context for an investigation.

Ask the children to imagine they are ancient Egyptian farmers. Use some fast germinating seeds such as radish, beans or a lettuce selection (all Egyptian crops) to investigate the least amount of water needed for seeds to germinate. Put dry sand in five containers to about 1cm deep. Count out or weigh equal amounts of seed and scatter over the sand. Add no water to the first dish, 20cm3 to the second, 40cm3 to the third and so on. Check every day for signs of growth. Can seeds germinate with very little water? How did the Egyptian farmers overcome the problems of lack of water in the fields?

It wasn’t just water that restricted farming; the four month inundation of the Nile covered the valley floor with fertile silt which made farming along the river bank and nearby plains easy in ancient times. Farming in wet, fertile soil is fine, but what about growing plants in less promising soils? Ask the children to devise a test to illustrate the least fertile to most fertile growing conditions – from 100% sand to 100% garden compost and points in between. Where do the plants grow best?

The ancient Egyptians measured time and were the first people to divide both the night and day into 12 equal parts, which gave us the 24 hour day. They had several ways of using the shadows cast by the Sun to tell the time and children can investigate how they did this.

Find a sunny point in the playground and plant a PE/rounders pole there. Note the position of the Sun and draw round the shadow of the stick every hour on the hour. How do the shadows change? Is it the same the next day? Challenge more able children to make a portable sundial. What would they need to know to tell the time using their sundial in locations other than the original school yard position?

Ancient Egyptian religion said that the Sun god Ra travelled across the sky in the daytime and was swallowed by the goddess Nut a night and reborn from her at dawn. Can the children describe and compare our current scientific ideas of why the Sun appears to move across the sky with those of the Egyptians? 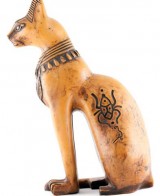 These are only a few ideas, but there are so many ways we can bring science into a topic on Ancient Egypt: think about comparing and contrasting modern and ancient Egyptian food and diet, which was ‘better’; was gritty bread better or worse for dental health than a modern diet of sugary food. For an investigation of rocks and soils, think about why Egyptian structures like the pyramids and Sphinx remained and others, like the adobe workers dwellings, have not? Why did the Egyptians wear white clothes? Are white clothes cooler than black? How can we find out?

There are endless investigations to enjoy in your Egyptian topic and whatever you decide to do it’s the process of finding out that matters.

What do the proposals for the new primary curriculum really mean for science?

Myth
It’s not a core subject; there are no SATs so I don’t need to teach science any more
Reality
All subjects will continue to be taught and science continues to be central to children’s learning